As rent skyrockets in most ski towns, and the trend of mobile tiny homes continues to proliferate, more and more disgruntled ski bums are flocking to motor vehicles as their primary living quarters. The draw of the open road, chasing pow, and cheap living is one that lures these Kerouac spirits to the asphalt rivers of the United States. With so many different motor options out there for the would-be vagabond, we at TGR put a list together to say what your car camping vehicle says about you. Enjoy and see you on the road. 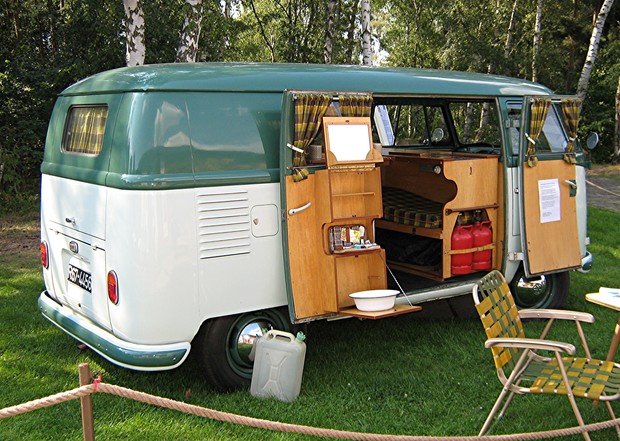 The van most of us will drool over. Wikimedia Commons photo.

You are connoisseur of everything that is fine and good in this world. Your beer is craft, whiskey aged to perfection, and beard long as the California coastline you travel with earnest. Your knowledge of the road is only second to your mechanic ability, as every hundred miles and state line requires the constant tinkering of your four-wheeled work of art.

RELATED: Cyrus Sutton on the qi of the van life

The smell of the finest recreational herb lingers in the tapestry-lined walls of your vintage dirtbag mobile. A mason jar filled with the leftover quinoa dinner from the night before rolls on the floor as you check your iPhone 6 for the latest swell. You are who we all aspire to be. 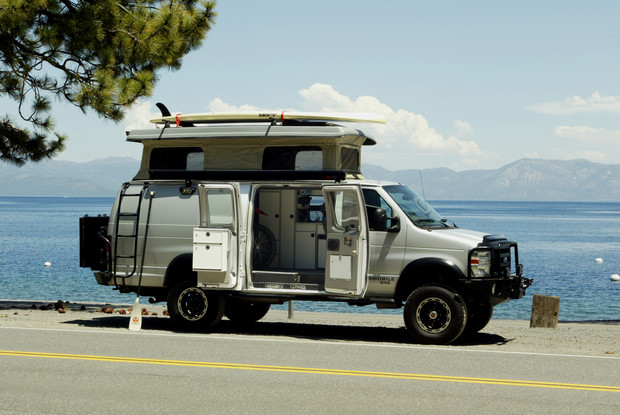 You are currently careening down a fire road with six months of food, gas, and Red Bull. The outside of your vehicle does not look unlike a Humvee ready to invade Afghanistan. You say "fuck it!" to the regular freeways and highways filled with hamsters on the way to the rat race; the bumpy, seldom-travel forest roads that you can only locate on old mining maps are your home.

Activities of choice include emasculating Prius drivers and maintaining your Instagram account. Your gateway car of choice that led you to purchasing this vehicle was a Jeep Wrangler or a lifted truck you bought for cheap off a Jeff Gordan fan. 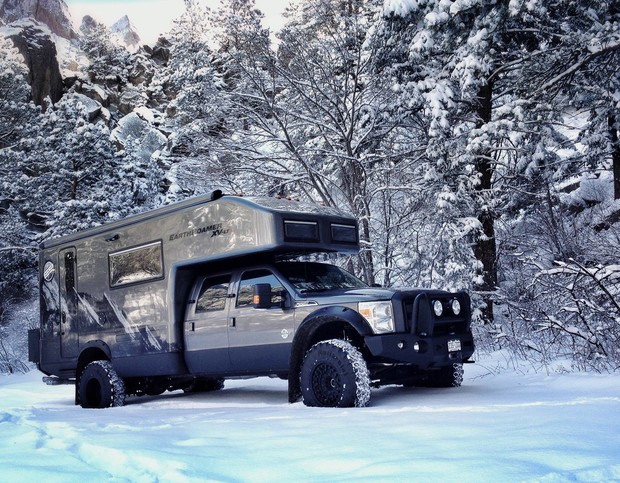 You just sold your start-up that you slaved over for ten years to Google for millions of fucking dollars, and with time on your hands and a thirst for all things outrageous and outdoorsy, you skip the Ferrari and drop $300,000 on a custom Earthroamer instead–basically a mobile version of a room at the St. Regis that can also drive over whatever the steering wheel is pointed at. You have to rent an entire parking garage in San Francisco to find enough parking spaces to store it, but when you're not casually starting your own venture capital fund or dropping your kid off for $16,000 pre-K at the Stratford School, you're taking up two lanes on I-80 on your way to Lake Tahoe, where you'll enjoy a home-cooked feast of rare quail and $200 chianti after bombing 30 miles up an abandoned Forest Service road. 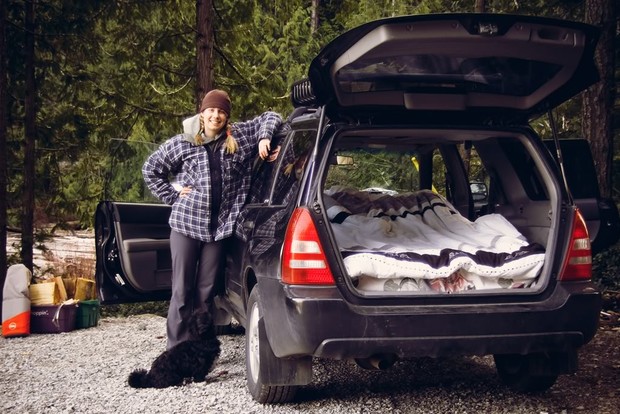 The most common sight in a ski town. Subaruforester.org photo.

The ink on your liberal arts degree has barely dried, and you have packed up all your belongings to hit the open road. The highways are home, and Wagon Wheel the soundtrack to this new life. An old Thermarest serves as your “king size bed” and an old copy of On the Road lies, mostly unread, on your pillow.

Your diet of gas station snacks is supplemented by Ramen and Ragu cooked by the warm glowing light of your whisperlight stove. A ripped thirty of PBR spills in your backseat as you fly to your next adventure, couch, and shit job. Life is yours, and now. 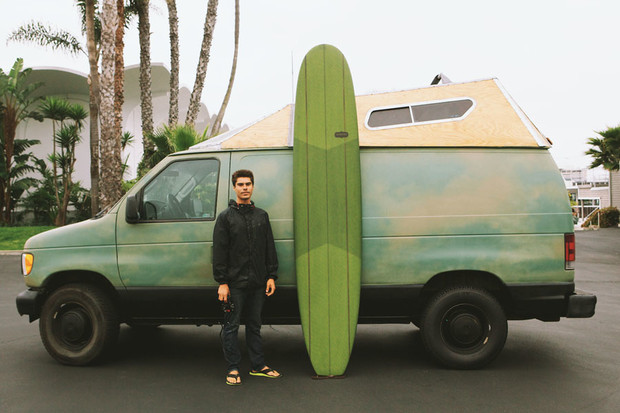 Damn it feels good to be a gangster! You are an OG–imitators beware of the original. Your inspiration comes the original dirtbags of Yosemite’s Camp 4 and now modern day vagabonds like  Foster Huntington, Alex Honnold, and Cyrus Sutton.

From remote surf breaks on the coast of Baja to pow slashing in British Columbia, to roving the American West in search of adventure, you are the envy of wishful Instagram users everywhere, who envy your lifestyle and your ability to turn a beat-up rape/mechanics van into a full-time home with all the requisite amenities (except a toilet, or a shower, or headroom). 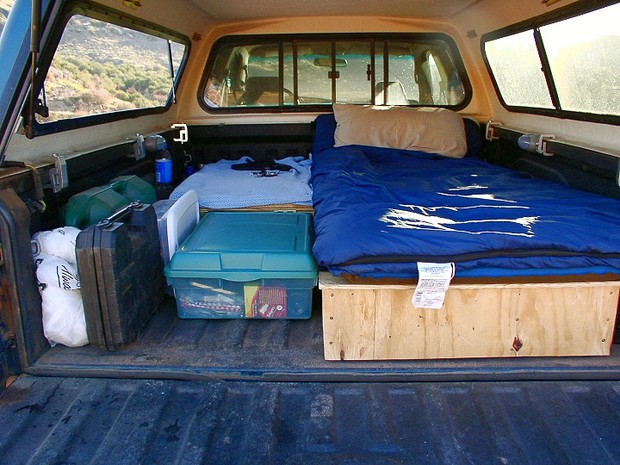 Your version of insulation is a -20 degree down sleeping bad. Your ski jacket has more holes in it than a golf course, and is patched with almost a full roll of duct tape. You recently had to rub a little rust off your tele bindings, but you don't mind because while the rest of the world is dealing with lift lines, you are freeing your heel and mind in the backcountry.

You sport an old Carhartt jacket and can spout more engine facts about your old Tacoma than a history professor about ancient Mesopotamia. The road isn't a way to get from place to place, it is home, and diesel is your lifeblood. 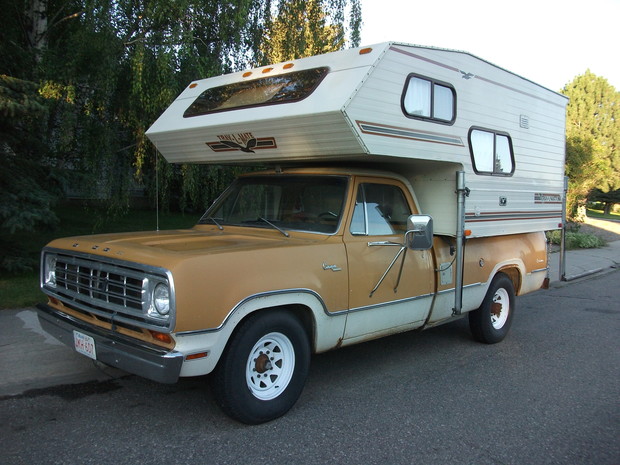 Your truck is much newer, but your camper was still built during Van Halen's first tour. Wikimedia photo.

You're that same bum who used to sleep out of your uninsulated truck top camper, but you've since upgraded to a much bigger truck (because you're a man) than your first tiny two-seater Tacoma, and you've slowly saved enough money as a carpenter to be able to afford more than just a wooden shelf to slide into your trunk to sleep on top of and slide your skis underneath. Now you can enjoy all the features of a fully-functioning standalone pickup and still mount up the camper for some off-road camper on BLM land around Moab in the off-season with your wife and lab. 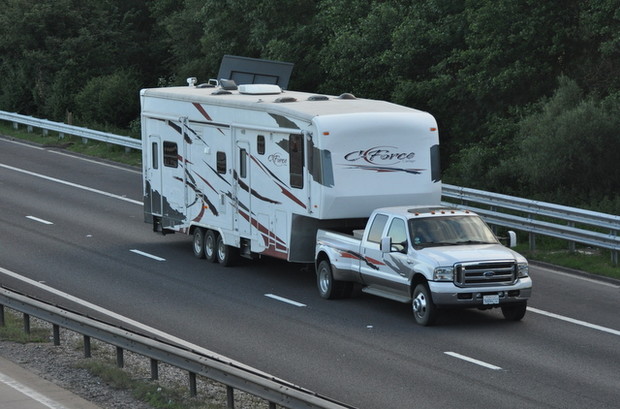 The most American way to camp, bar none. Wikimedia photo.

You kind of missed the memo about camping in your flyover state, and thought the wilderness experience meant towing a second home with Showtime on demand to a paved parking spot somewhere kind of near some woods so you could plug into the water, gas, and electric lines and otherwise suffer no loss of quality of life and still watch the entire college football lineup on Saturday no matter where you are. 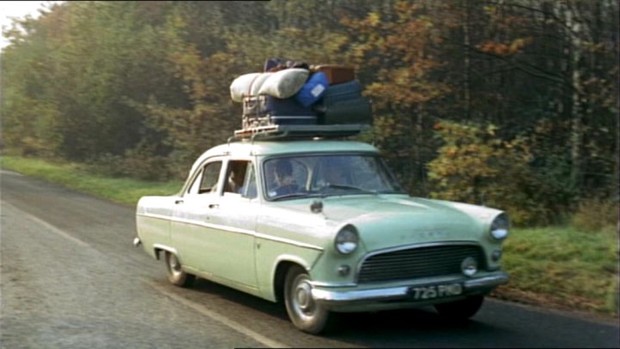 The original car campers. They were called the Griswalds. IMBD photo.

You have had this car since you where sixteen, license hot off the printing press, and the promise of backseat promiscuity fresh in mind. Most importantly, this car has never failed to get you to the mountain. Sure it is uncomfortable to sleep in the backseat, but you would much rather use that hard-earned money from washing dishes on new gear and gas money.

Eventually, when you sell enough weed or settle down (for a couple months) you might buy another one of these vehicles on this list, but until that glorious day arrives, fresh powder turns await, and they will not be compromised by the fact that you're suffering from a bulged disc from sleeping in the fetal position in the back seat week after week.

From The Column: Base Camp

What Does Your Car Camping Vehicle Say About You?

​The Pursuit Of Parking: Building, Living…

How Mikey Basich Keeps Reinventing Life on the Road

​This Ain’t #VanLife: Austin Smith and His…

How Chris Grenier and Alex Andrews Built an Action…

How Zahan Billimoria Turned His Garage Into a…

How Tyler Bradt Travels the Globe Surfing and…

Tragedy, Rebuilding and Life on the Road: How…

How Wintertux Built a Backcountry Skiing Oasis in…

Rory Bushfield on How to Build Your Own…

The Cinder Cone Might Be The Treehouse That Can’t…

How To: Hack your Van Into The Ultimate Camper Van

​Nobody Is Vanlife-ing As Good As This Guy Nice one- I roll in a ‘97 All Wheel Drive Chevy Astro Van. First thing I did when I bought it was rip all the back seats out so now I have a 3.5x7.5ft zone w a non-slip rubber base to throw wet gear or a mattress down on. I also transplanted the aluminum tool racks from my old ‘99 Safari into this one, so I’ve got plenty of gear storage that’s easily organized too.
It’s small enough and non-pervy enough that it tends not to attract “the man” when illegally camping. My only beefs with it are the fuel economy (AWD all the time w a 4.3L engine) and an extra 2 to 3 inches of clearance.

Cartoon HD is the best app I have come across in recent years. It is heartening to note that these apps are free of cost and also give us the best offers without any cost.
In today’s Internet, it is essential to note that nothing is gratis. For more details check the process of Download

Car camping is less demanding and requires less exertion, however it can be a ton of fun. I think better Car camping for other vehicle. We get the chance to hang out additional, do fun stuff like swim, play volleyball or lounge around a pit fire. I’m going Car camping without precedent for my grown-up life. I think I have all that I require UK Assignment Help, are there any proposals or “lifelines” that anybody could recommend that I won’t not have idea of?

There is noticeably a bundle to comprehend this. I assume you made particular nice points in functions also. P20 Pro Singapore

Mind blowing concept are this website, and you will enjoy the most useful article are there if you are choose the article play euchre online free  are you are edit and add the more best content are this website.

Love all the options there are for car camping now!
Tree Service Company

READ THE STORY
Up Next Snowboard

In the pursuit of personal connection in life, sport and art, Lamont Joseph White is an artist who is at the forefront of fine art and the portrayal of diverse characters in sport. Inspired by his life, his observations on race and privilege, his connection to the outdoor world, art and snowboarding - he was an indisputable candidate to take on the project of creating the film poster for TGR’s latest film, Mountain Revelations. Mountain Revelations showcases the diverse stories between

READ THE STORY
Up Next Gear & Tech

As the holidays arrive every year, those of us who identify as having a “gear problem,” and frankly, everyone else, start to look for the best holiday deals on that thing to add to our gear closet per the “n+1” model. Days like Black Friday and Cyber Monday and tales of people lining up outside Target after their Thanksgiving dinners have been around forever. But in recent years, movements to keep holiday shopping away from large corporations have started. Things like Small Business Saturday

​These Non-Profits Are Making The Outdoors More Inclusive

​These Non-Profits Are Making The Outdoors More Inclusive

As premieres on the big screen in cities across the US, audiences have been introduced to Ryan Hudson, Rafael Pease, and their respective stories of struggle, perseverance, and success as professional snowboarders. While exploring wild and rugged Alaskan terrain with snowboarding icon Jeremy Jones, the three discuss challenging subjects: diversity, accessibility, representation, wealth disparity, and the physical and mental burden BIPOC athletes continue to shoulder while navigating the