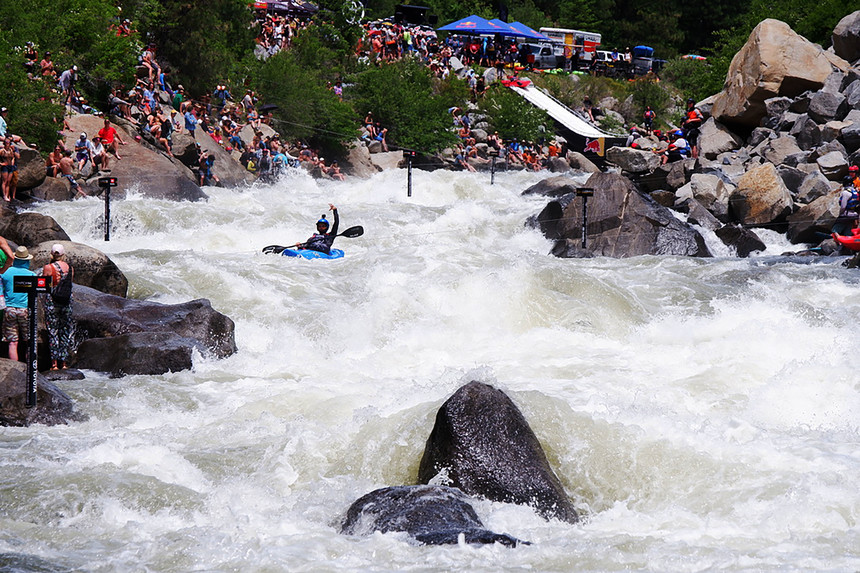 Few sports foster the type of community that whitewater kayaking does. Perhaps it’s the trust required in our paddling partners or perhaps it’s just how few of us there are. But either way, it’s no surprise that a community like this hosts an event where us kayakers refer to it as “spending the weekend in the center of the universe with 150 of our closest friends.” Despite a year hiatus due to the pandemic, whispers that the event would be forever cancelled, and almost nonexistent flows coming from the dam until days before the event, the North Fork Championship made its triumphant return this year, and boy oh boy was the stoke high. 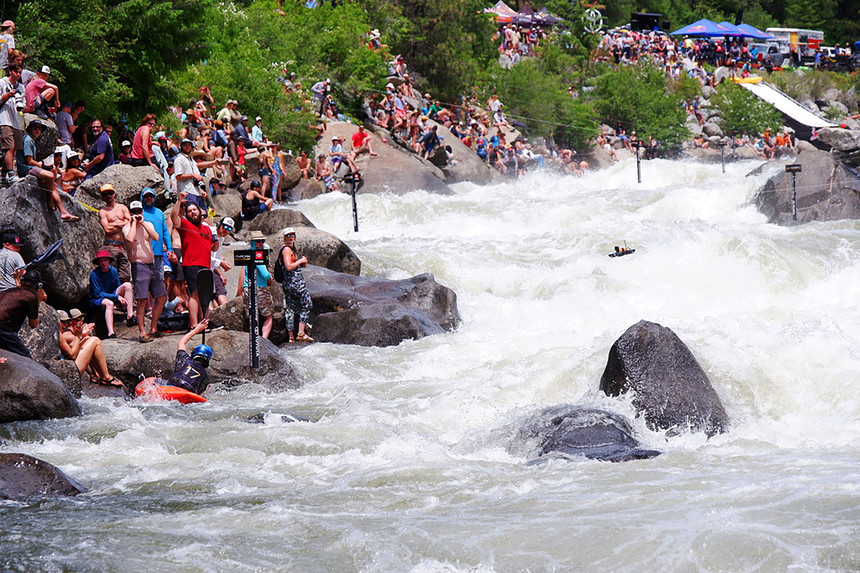 The North Fork Championship is a whitewater kayak race and festival held on Idaho’s North Fork of the Payette river. Lovingly referred to as simply “North Fork” by kayakers, the stretch is fifteen miles of committing, consequential, dangerous, and difficult whitewater. The river is divided into three sections, Upper Five, Middle, and Lower Five, each section holding five of the monstrous class V rapids the river is famous for. During the North Fork Championship, there are three different races held on two separate class V rapids.

The first race is the Kokatat Qualifier race, open to most applicants and takes place on S-Turn, the last rapid in the Upper Five. The qualifier race is a time trial, meaning races start 30 seconds apart and racers paddle the rapid as fast as they can. The top forty racers move ahead to the next day’s event, BoaterX.

BoaterX is one of the rowdiest forms of kayak racing given that heats of five or six boaters all sprint a rapid at the same time. In class V, there’s often one or two places you want to be in the river and a whole lot you wouldn’t want to be. With the added obstacle of five other kayakers all trying to block you, things get pretty rowdy. BoaterX is held on S-Turn as well, so what may have seemed simple in qualifiers is suddenly that much scarier. 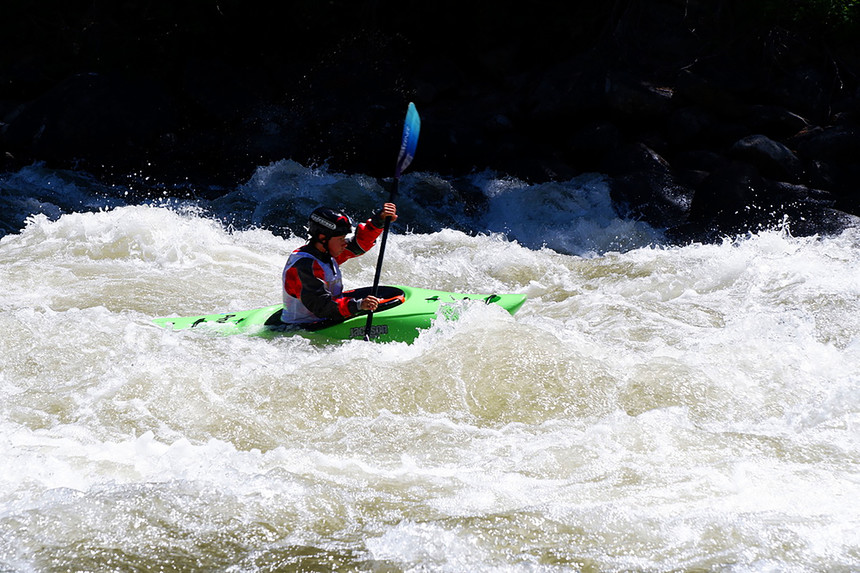 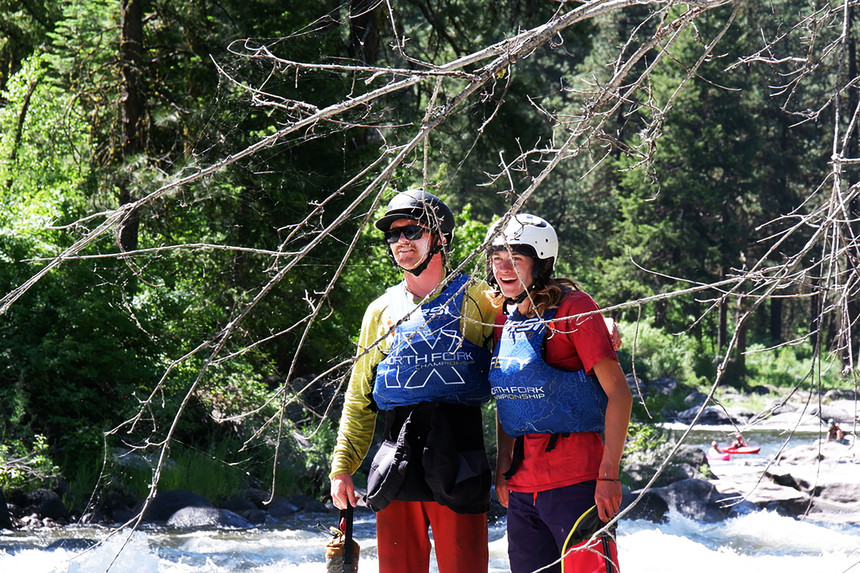 Lucky for racers, the NFC saftey team is made up of some of the best kayakers out there. Izzy Lidsky. 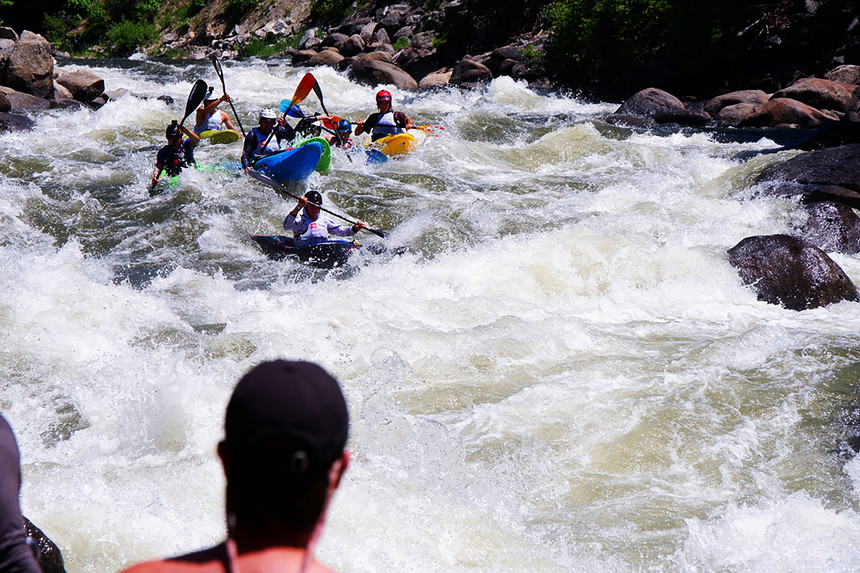 Lastly is the infamous Jacob’s Ladder race. Jacob’s Ladder is on the Middle section of the Payette and known for being one the biggest rapids on the stretch, let alone in the United States. Racers launch off a ramp above the rapid and into the river to paddle the rapid while catching eddies behind gates placed strategically through the run. Hitting or missing a gate results in a time penalty which can make or break a racer’s otherwise clean line. The best time of two runs is counted as their official time. 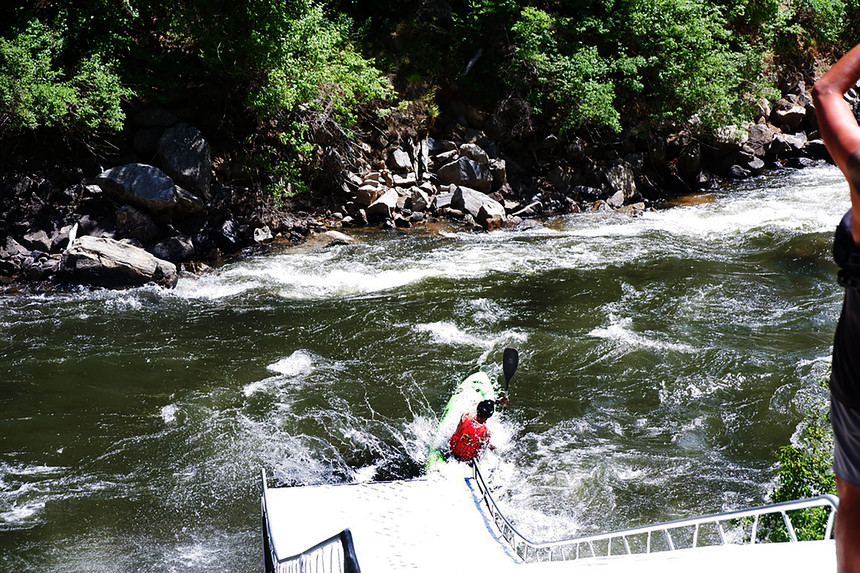 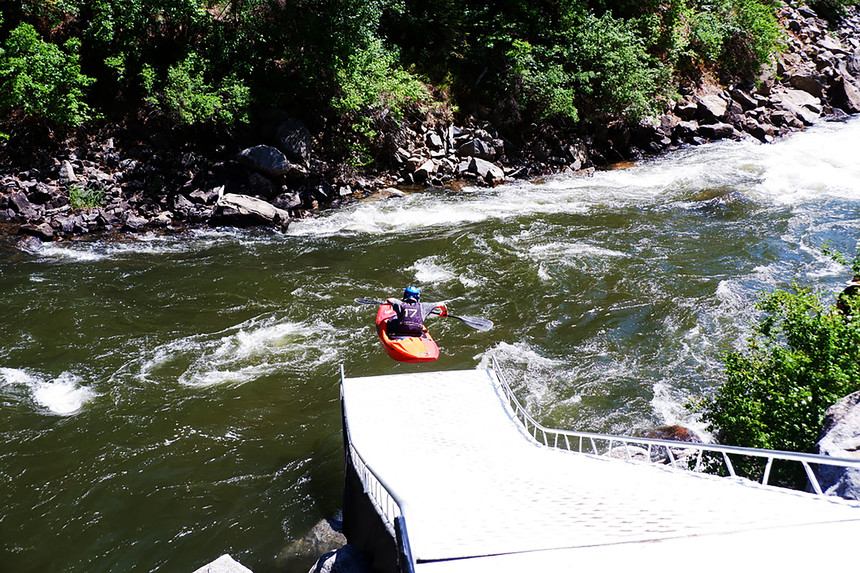 Dubbed the rowdiest race in kayaking, the Jacob’s Ladder race features twenty racers that have pre-qualified based on their kayaking performance and presence in the whitewater community. The top ten times from the initial qualifying race (that hadn’t already been selected) are chosen as wild cards to race Jake’s as well. This year, the race also featured a women’s category with five wild card racers vying for Queen of the North Fork. 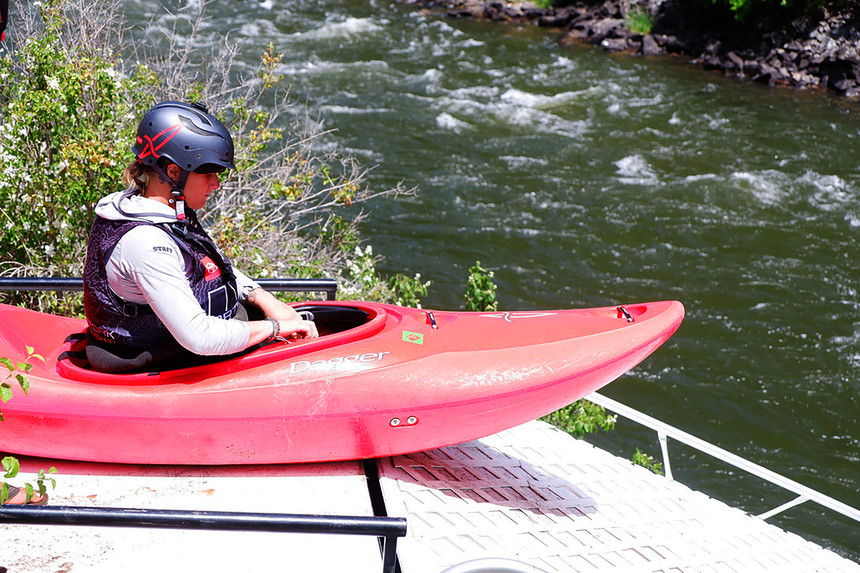 Queen of the North Fork Sage Donnelly in full focus on top of the ramp. Izzy Lidsky photo. 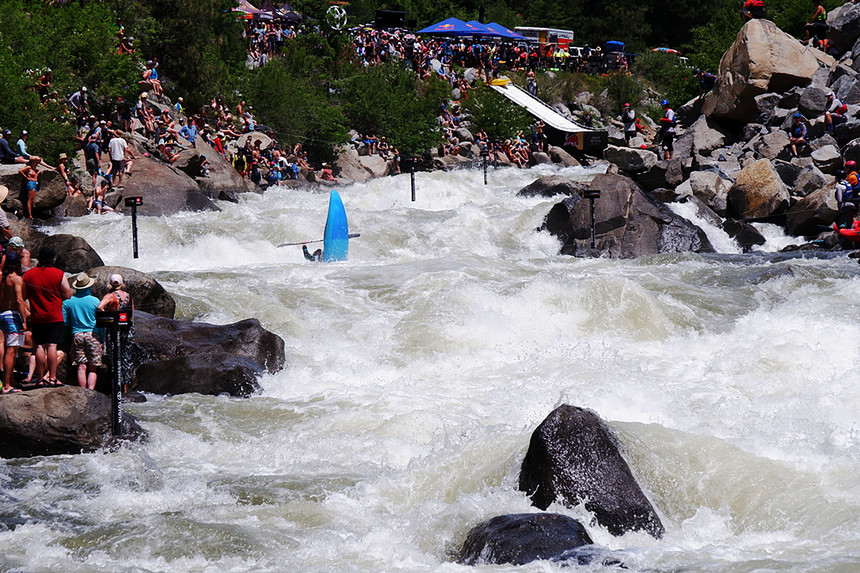 As athletes slowly trickled into Banks, Idaho last week there was a noticeable buzz in the air. While some of the energy can be chalked up to a whole year without every kayaker’s favorite event, there was also an intensity amongst the racers. This year’s North Fork saw so many unbelievably talented kayakers that the rumor mill started spinning about who would qualify and who would win. It was all speculative, of course. As always, the competition was fierce and Jacob’s Ladder was vicious, besting even the stoutest of kayakers and adding seconds to their times. 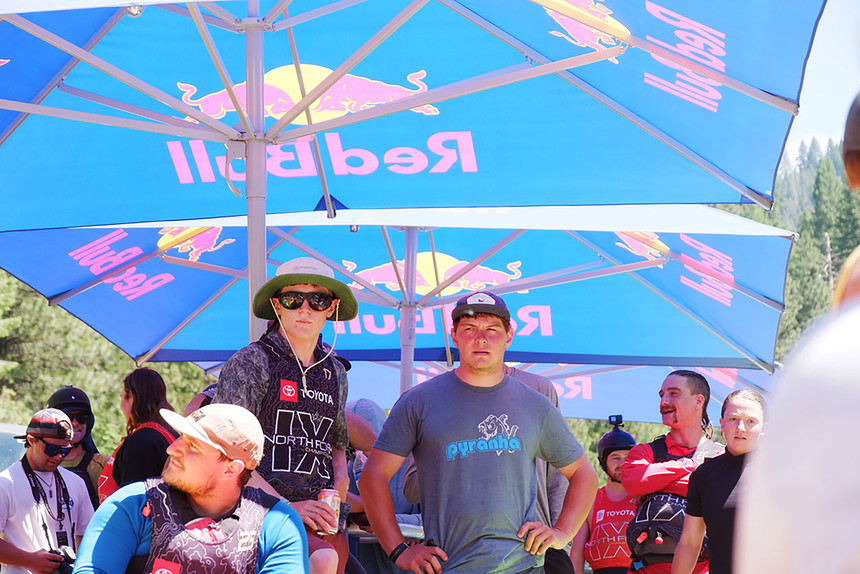 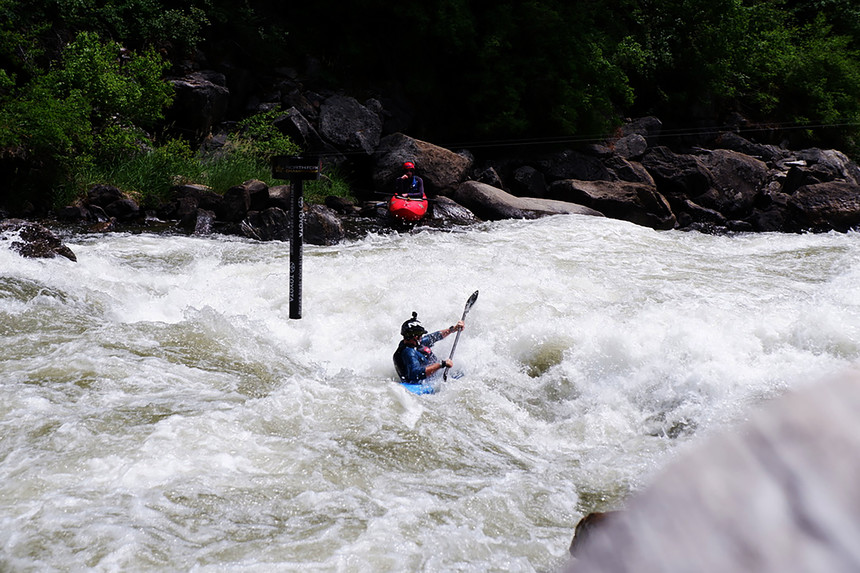 In the end, for the fourth consecutive North Fork Championship Dane Jackson was crowned King of the North Fork. Idaho local and North Fork Race organizer Alec Vorhees snagged second place after racing in his ninth consecutive North Fork Championship. Vorhees paddled his first ever top to bottom North Fork lap at eleven years old so it’s no surprise that at 24, he has the river pretty dialed. However, a thumb injury and subsequent surgery left him uncertain of how the race would go. After stealing second place in qualifiers and being only one second behind Dane, it was clear Vorhees’ eyes were securely on the prize. In third place, but first in the hearts of the kayaking community came Jeremy Nash. At only 19 years old, Nash prequalified for the race after proving his skills in the kayak community over the last couple of years. Less than half an hour before they announced winners, Jeremy admitted his uncertainty about racing in front of so many people and was pretty nervous rolling into his first lap. “But I hit ctl-alt-delete in my head and just focused on the whitewater for the second lap,” said Nash, and clearly his mental game paid off. Nash hails from Long Creek, South Carolina, one of the biggest kayaking communities in the US and represents the affectionately named KLCG (Keep Long Creek Gangsta) crew. As his time was announced, other KLCG paddlers as well as many local Jackson paddlers stormed the stage to hug Jeremy in celebration. For such a hardo sport, it was a pretty sweet moment. The top ten times from the Jacob’s Ladder race will pre-qualify for next year’s race automatically. Racing alongside Dane, Alec, and Jeremy next year are Tad Dennis, Kalob Grady, Hayden Vorhees, Pedro Astorga, Holt Mcwhirt, Cole Moore, and Carson Lindsay. 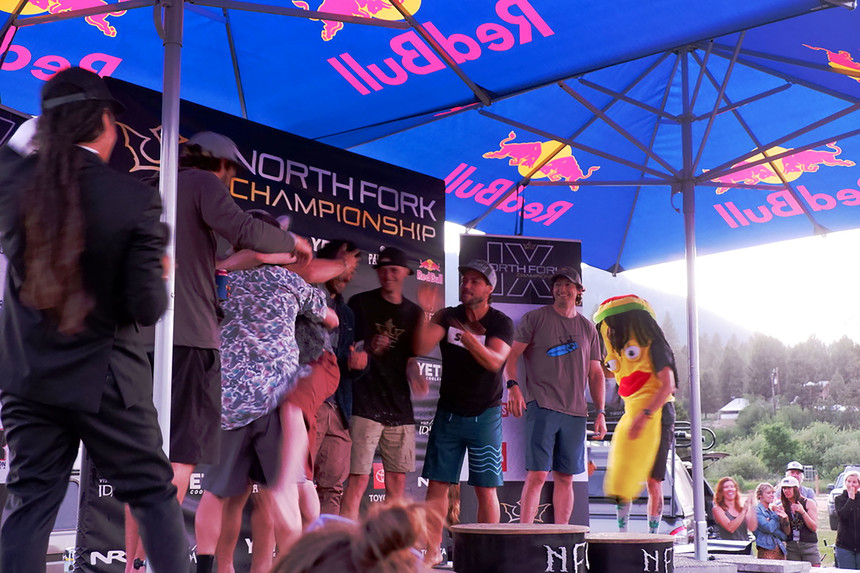 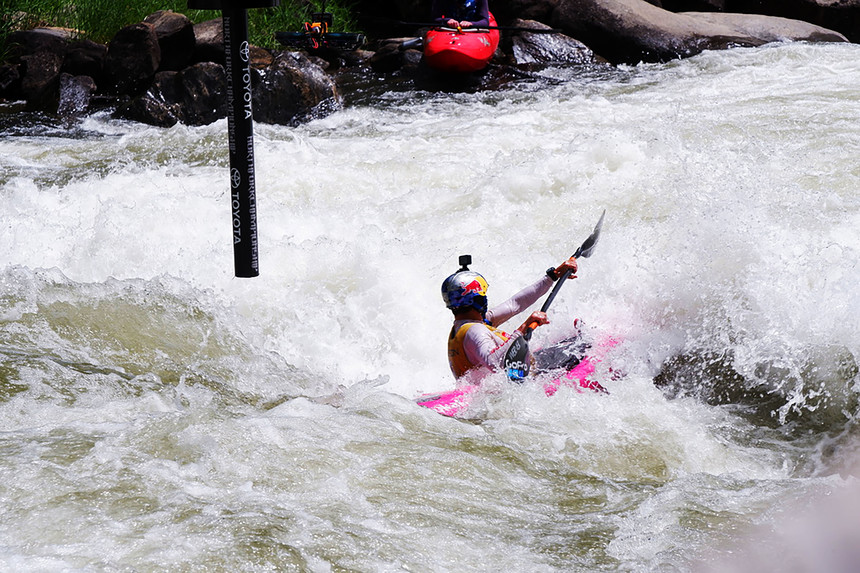 The legendary Dane Jackson looking fast as ever coming through the gates. Izzy Lidsky photo.

In the women’s category, powerhouse Sage Donnelly took first place. As a former Team USA kayaker, it’s no surprise that Donnelly’s runs were absolutely dialed, landing her a time almost a minute ahead of the second place finisher. But that’s no dig at the legendary Natalie Anderson who raced during 2019’s world championships and has been a staple in the kayaking community for years. In third was Darby McAdams, the very definition of tiny but mighty. McAdams has been running stouts for a pretty long time now and seeing her crush Jacob’s Ladder was epic. In fourth and fifth places came Kirra Paulus and Anna Wagner who both deserve an honorable mention. Paulus had never run Jacob’s Ladder until the day before the race and ran 11 practice laps to dial in her line. Wagner was the first woman to grace the cover of Kayak Session Magazine earlier this year and was also the very first racer off the ramp during the event. 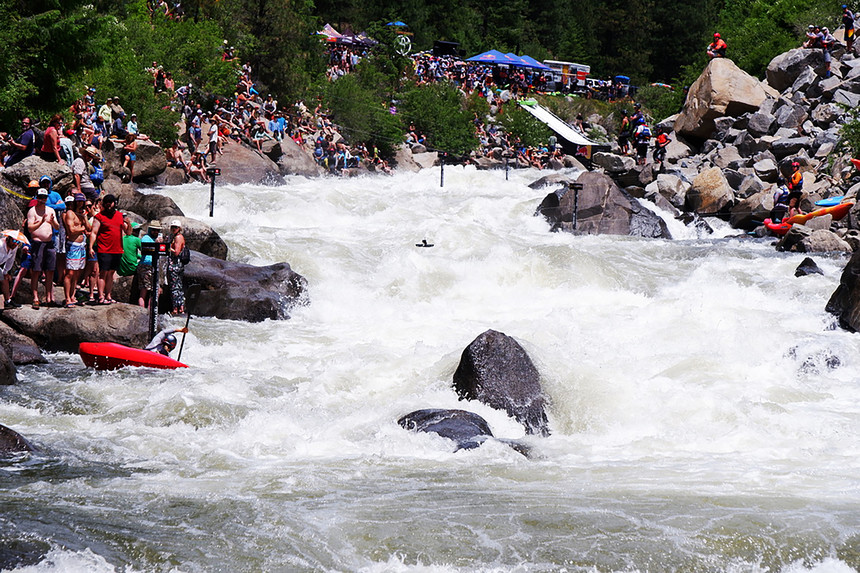 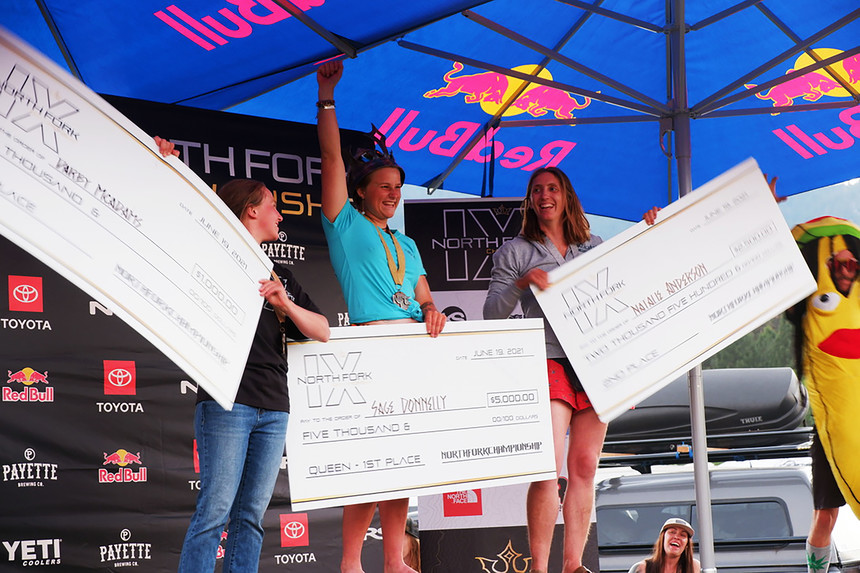 All three women on the podium were awarded equal prize money as the top three men. Izzy Lidsky photo.

Although the event culminates in one of the most extreme races in sports, North Fork Championship is about so much more than racing. Kayakers flock from all over every year to reunite with their friends, run the miles of whitewater that Banks has to offer, and boogie down at Idaho’s favorite bar, the Dirty Shame, when all is said and done. While Dane Jackson and Sage Donnelly may have been crowned King and Queen of the North Fork, every single kayaker that attends the North Fork Championships is winning in their own way. 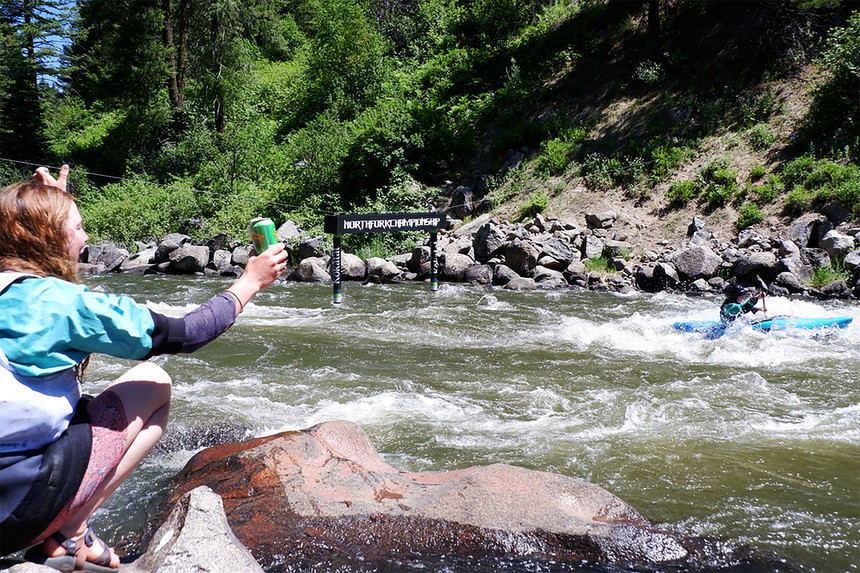 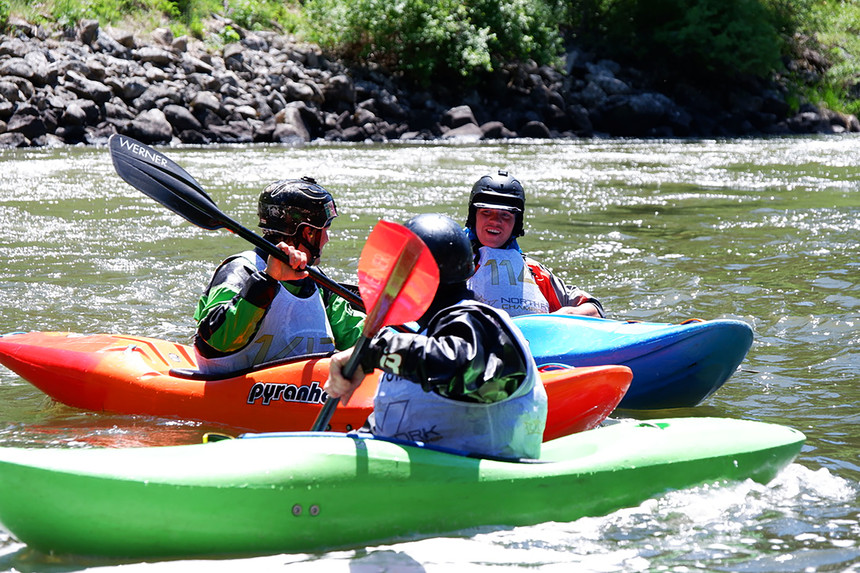 Comraderie is well and alive at the North Fork Championships, especially between former coaches and students racing together. Izzy Lidsky photo.

Learn the best programming language with which knowledge you will be helped very much in IT industry.

READ THE STORY
Up Next Skateboard

Skateboarding is officially an Olympic Sport and Lizzie Armanto will be representing Finland this summer in Tokyo. | Christina House photo. Skateboarding will finally make its debut as one of the 2021 Summer Olympic sports and we’re fired up. The competitions will consist of park and street events with equal numbers of competitors in both the male and female divisions. Although it may not seem so, this is a huge step for the female skate community, considering many women are unable to

READ THE STORY
Up Next News

Fact: Climbing is a popular sport. And it’s gotten even more popular during the COVID-19 pandemic. In places like Yosemite, the mecca of North American big wall climbing, that popularity has led to ever-increasing amounts of climbers on multi-day routes like those on El Cap or Half Dome. In response to those growing crowds, and the impact they have on the walls they climb (read: leaving poop and gear on routes) the National Park Service is testing out a new system requiring all overnight

READ THE STORY
Up Next Kayak

Does it Go? A Closer Look at Waterfall Kayaking and Decision Making

Does it Go? A Closer Look at Waterfall Kayaking and Decision Making

When watching action sports media, many viewers react along the lines of“how do you even do that?” But even in the most extreme cases of skiing, biking, or surfing, there’s some understanding of what’s required mechanically. For example, not everyone who learns how to ski learns how to do a backflip, but most people know how to make a turn. Often there’s a baseline understanding of what we’re watching, even if it’s on a different level from the viewer. However, whitewater kayaking has a